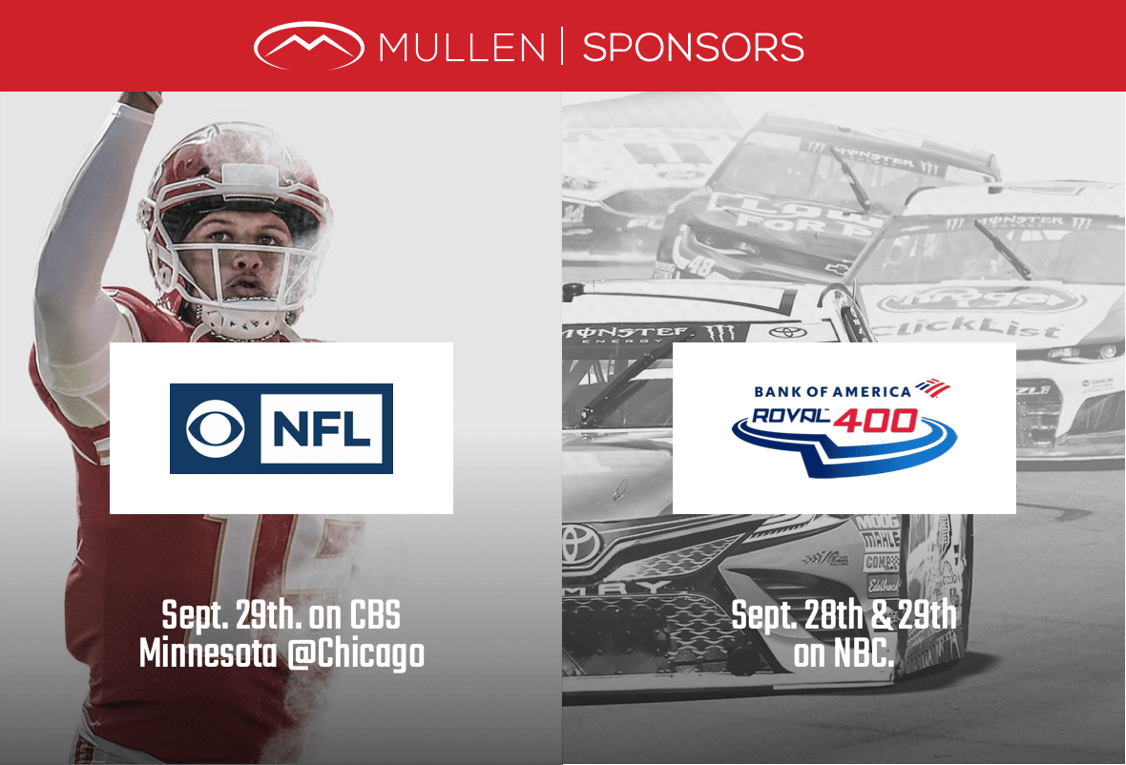 BREA, California, September 27, 2019  -  Mullen Technologies, Inc. (“Mullen” or the “Company”) will provide aerial coverage for two major sporting events this weekend, Sept. 28th and Sept. 29th, 2019. On Saturday and Sunday, Mullen will be in the air above Charlotte Motor Speedway in North Carolina, first for the Drive For The Cure 200, Xfinity series race airing live on NBCSN. On Sunday, Mullen provides aerial coverage of the ROVAL 400 airing live on NBC. Prime time commercials for Mullen’s K50 electric supercar will also air during both daily events.

Also on Sunday, Mullen will provide CBS and the NFL with aerial coverage of the Minnesota Vikings vs. Chicago Bears matchup, airing live from Soldier Field in Chicago, IL. The game will be televised nationally to most US markets with Jim Nantz and Tony Romo announcing the matchup for CBS.

“It’s getting down to it with the beginning of the playoffs for NASCAR, with four drivers being eliminated after last weekend’s race,” says Mullen Founder and CEO (and NASCAR fan), David Michery. “Anybody interested in high performance – both from cars and drivers – will be watching this weekend, so we are proud to both provide them with great overhead coverage and introduce them to our electric sportscar, the K50.”

Regarding the NFL Sunday grudge match between the perennial NFC North division rival Vikings and Bears, Michery says, “Anytime these two teams meet, you know it’s going to be a great – and highly rated – battle. It’s an ideal time to introduce a lot of fans to Mullen, and specifically our K50 electric sportscar, which rivals any other cars in its class for engineering, style, and performance.”

Coverage for Saturday’s Drive For The Cure 200 begins at 3:30pm EST.

Based in Southern California, Mullen Technologies is a licensed electric vehicle manufacturer. Mullen Technologies owns a number of synergistic businesses including: Mullen Auto Sales, a fast-growing series of pre-owned auto dealerships through California, CarHub, a new and unique digital platform that leverages AI to offer an interactive solution for buying, selling and owning a car and Mullen Finance Corp., a captive finance arm for consumer vehicle leases and loans. In addition, Mullen is currently working independently and with several OEM partners to provide exciting electric vehicles that will fit perfectly into the American consumer’s life.